Home » Featured » Third Mayo Fleadh in a row for Swinford

Third Mayo Fleadh in a row for Swinford

The last notes of Fleadh Cheoil Mhaigh Eo 2014 still echoed as the announcement was made that Swinford’s Comhaltas branch will again host the event in 2015.

The 2014 Fleadh was an unqualified success – on Sat. 10th and Sun. 11th of May the local schools accomodated the hundreds of juniorand senior competitors who played their tunes and sang their songs to the experienced ear of the adjudicators.
The grand finale on Sunday evening, the highlight of the Fleadh,took place in front a packed auditorium who enjoyed a magnificent and rousing performance from the Grupai Ceoil and the Ceilidh Bands as they brought the competitions to a close.
The competitors are the Fleadh and its main focus; this is the first step on the journey for the musicians who aspire to Provincial level and who ultimately wish to compete in Fleadh Cheoil na hEireann.

The Fringe events accompanying the Fleadh Cheoil also attracted a lot of attention. All roads led to Melletts on Thurs.8th to an evening of culture organized by an Coirceal Gaeilge. Dr. Deirdre Ní Chonghaile of Aran delivered a fascinating lecture on the life and work of An tAthair Donal O Mórchada (1858-1935) – a native of Kilmacteigue who emigrated to Philadelphia and amassed an extensive collection of versions of rare and familiar songs in the Irish language from emigrants and previous generations who had settled there.

The lecture was followed by an excellent Oíche Amhránaíochta with much traditional singing and music to entertain the gathering. Two of the singers who enchanted their listeners were Sile O Mongáin of Doohoma and Nodlaig Nic Aindriú of Castlebar.

A bilingual puppet show entitled An Cochaillín Dearg was presented by Carmel Balfe and delighted a young audience in Midfield on the Wednesday preceding the Fleadh thanks to sponsorship from Tógra Mhaigh Eo and The Arts Council. The event was produced by Little Gem Productions. 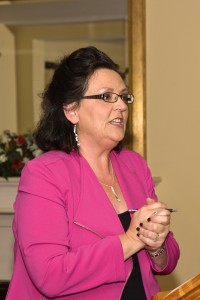 Fleadh Cheoil Mhaigh Eo 2014 was launched officially by Dr.Katie Sweeney Co-ordinator for the  integration of music in Educationon on Friday May 9th in the Gateway Hotel.Barbara Fogarty,  Chairperson of Swinford’s Michael Davitt Branch, welcomed the guest speakers who included: Vincent  Jordan, Uachtaran an Comhaltais; Padraic Egan, Chairman of the County Board and MIchael Brennan,  Chairman of the Connaught Council.

Dr.Katie Sweeney – a renowned Sean Nós singer – gave an inspiring address and gave the assembled guests a rendition of Cúl na Binn before she declared the Fleadh to be well and truly launched.

Thanks to Marie Holmes Walsh, PRO of Swinford’s Michael Davitt branch of  CCE for this post.