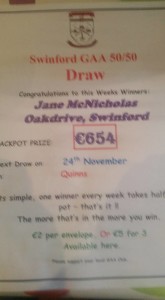 This weeks draw for Swinford GAA 50/50 draw was held in Julians on 17th November and Jane McNicholas of Oakdrive won €654.00. The winning envelope was sold by Mary Ryland. Envelopes are available in most business premises and online through www.swinfordgaa.ie where tickets can be purchased in bundles of 10/25/52 weeks. Next draw in Quinns on 24th November. Draw envelopes are now also available at 3 for €5.

On a cold cold afternoon at the Connacht Centre of Excellence in Bekan Swinford dispensed with Belmullet in the quarter final of the MD Roofing Services Under 21 B Championship. We march into the semi-final against neighbours Charlestown.

It was a game that we controlled from start to finish and finished with eight different scorers and 21 points on the scoreboard.

From the throw in we attacked the Belmullet defence and James Devaney soon had us off and running. This first score was soon followed by points from Kevin McDonagh, Johnny Burke, Mark Forkan and a free from Liam Moran. Belmullet could not get a look in and our dominance continued with more points from Johnny Burke and two more from Liam Moran and one from Michael Walsh.

With twenty minutes gone with us leading by 9 points Belmullet got their first score and this was soon followed by another point and a goal to bring them back to within 4 points. With no wish to let Belmullet back into the game Kevin McDonagh added a free and Liam Moran with  fourth point. Belmullet added two more points split by a point from James Devaney to leave the half time score at Swinford 0-12 Belmullet 1-4.

From the start of the second half there was no relaxing and Liam Moran went on a great run, leaving four defenders in his trail and scored a great point. This was quickly followed by a point from Johnny Burke, Kevin McDonagh, Mark Forkan and James Lavin to give us a ten point lead after ten minutes.

Jonathan Giblin was called into action and made a very good save and from their next attack Belmullet sent a long range shot off the upright and wide. You are never going to dominate a game for the entire sixty minutes and Belmullet scored the next three points but this was as close as they got in the second half. Another point from Mark Forkan and a free from Liam Moran eased the pressure. Both teams swapped a couple of points with scores from Ryan Convey and the final score coming from Kevin McDonagh to finish at Swinford 0-21 Belmullet 1-9.

It was a dominant performance from Swinford and we will now play Charlestown in the semi final.

The annual general meeting of the club will be held in the Gateway Hotel on Sunday 29th November at 6pm. Nominations or motions must be with the club secretary by Wednesday 25th.