History was made on Saturday evening at Elverys McHale Park as we won our first Under 21 Championship. We suffered defeats in our two previous finals in 1993 and 1998 but this time we were by far the better team.

It took a little time for us to get our rhythm going in the game. Daviits playing with the win into the bacon factory end got off to the better start and after five minutes were two points up.

It took us until the 7th minute to raise our first white flag with a nice point from Kevin McDonagh and we were quickly level with a point from James Devaney. There then followed a great goal chance from James Devaney.A nice move ended with a cheeky chip of the Davitts goalkeeper but the ball just trailed wide of the post.

Davitts retook the lead from a free but the game was soon level for the second time when a high ball into the square was punched over the bar by Ryan Convey. On the 15th minute we took the lead from a well taken point by Kevin McDonagh which was set up by Johnny Burke winning the Davitts kickout. We were then in complete control and two points from James Devaney had us leading by double scores after 20 minutes. Unfortunately the game then swung the way of Davitts and they rattled over two points. It could have been worse for us but for a great save by Jonathan Giblin.

Liam Moran then got his first score of the game from a free before davitts finished the half the stronger and scored two points to leave it level on 7 points a piece at the break.

We got off to a great start in the second half with a great point from Sean Brady from over 40 yards. Some great work by Sean Prendergast in front of the stand led to a second scored free from Liam Moran.

Davitts then got a soft free to bring the game back to one point but that was as close as they were to get as for the next 15 minutes we dominated the game. Liam Moran showed why he was a worthy man of the match scoring 1-3 including two frees and a great goal. James Lavin received the ball inside our own half and played it down the sideline to James Devaney who did very well to stay in play, he drew in the defenders and played the ball to a charging Liam Moran who sweetly put in in the back of the net.

Just before the goal we lost Sean Prendergast to injury and he was replaced by Conor Conway.

Davitts never gave up and scored two points but Liam Moran wasn’t finished and got a lovely point from well out the field.

Liam Moran scored his final point with a free from 45 yards out to finish the game with 1-7. In between Davitts got some consolation scores before Kevin McDonagh finshed the game with a point from the left sideline.

Into the last stages of the game Johnnie Pidgeon replaced James Devaney.

The MD Roof Services trophy was presented to our joint captains Mark Forkan and Stephen McNicholas.

Along the way we beat Erris St. Patricks, Belmullet and a great win over our neighbours Charlestown in the semi final. Playing football in December is not ideal but it worked perfectly for us to give a great end to the year for the club.

Thanks to Swinford Killasser Ladies club for the use of their jerseys. Their great year certainly rubbed off on us. Thanks also to Philip Durkin for the pictures on our facebook page. 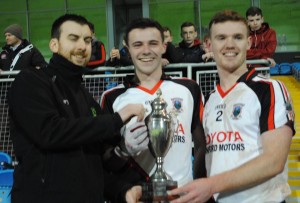 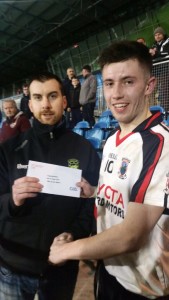