YOUNG MAYO PERSON OF THE YEAR 2018 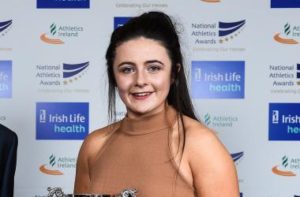 Congratulations to Michaela who has been honoured by The Mayo Association Dublin as their young person of the year for 2018.
Once one of Mayo’s most promising young footballers in a county where the sport is a valuable currency, Michaela chose instead the less glamorous world of field sports where, in the words of her club, she is “the most outstanding junior athlete not just in Mayo, but in the country”. Michaela is the flag-bearer for Ireland’s 4,000 year history with the hammer throw.

Having helped bestow enormous honour and success on Swinford through her GAA efforts she turned to the discipline of throwing events where at 15 years of age she won the Irish schools’ championship in the shot put and hammer.
She competed in the 2014 Beijing Youth Olympics where she finished sixth, despite competing against throwers from around the world aged one year older.
Michaela has set a number of new Irish records for her age group and has been recognised locally, nationally and internationally. This culminated in her winning a bronze medal in the hammer at the European Junior (Under 20) Championships in Grosseto, Italy in 2017.

She also finished in seventh position in the shotput at these championships, again remarkably the only athlete to qualify for both throwing finals.
This is the first medal won in the hammer in an open international championship by an Irish athlete since 1932. The previous winner was Dr Pat O’Callaghan at the Los Angeles Olympics.

Michaela’s bronze is also the first-ever Irish medal in the hammer event at European Championship level. She is currently ranked second on the Irish all-time list for the women’s hammer and fourth in the shot put.

Like Katie Taylor she is a young woman breaking sporting ground in unfamiliar territory. Her story is a positive one both in terms as a female role model for young girls and the prestige she will bring to her native Swinford and Mayo.

Congratulations to Michaela the 2018 Young Mayo Person of the Year. The people of Swinford are very proud of you. 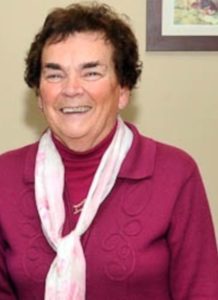 Congratulations are also extended to Sr. Maureen Lally, who has been honoured with Mayo Person of The Year 2018.

Sr Maureen lived in the Convent of mercy in Swinford and also taught in the school for many years.

Sr. Maureen is being honoured by The Mayo Association Dublin for her work with many communities in Mayo. In conjunction with major institutions like Michigan State University, she pioneered the Tóchar Valley Rural Community Network (TVRCN), which brought together 18 communities from Balla to Murrisk, and helped to stem the predicted decline of agriculture and rural life in the area.
Sr Lally had a firm belief that no community on its own can achieve as much as a network of communities working together toward shared goals. TVRCN remains a voluntary grassroots rural community network, committed to the empowerment of rural people in the development of sustainable rural communities.

She has also spearheaded the three-day Summer Solstice Walking Festival along the Croagh Patrick Trail, beginning in Balla meandering through the unspoilt landscape and rich heritage of central Mayo. She also served as a board member for the Western Development Commission. She has been instrumental in bringing the Community Futures programme to Mayo, a proactive process where all community members have a voice in decision making and planned development.
Through her quiet influence, relentless positivity and loyalty our winner has contributed much to our native county. In the words of one prominent academic with whom she has worked ‘’ In a world where the loud and boisterous seem to reign supreme, we acknowledge and hail the work of a humble and reserved enabler, a true champion of the people.”

If you would like to attend to show your support to the two worthy recipients, You can buy your tickets for ‘The Yew Tree Ball’ at www.mayoassociationdublin.com