Last Friday was a beautiful evening in Dublin and the streets were alive with tourists and locals dining and socialising outside the bars and restaurants. I arrived to the Stag’s Head, the venue for the Swinford.ie launch party, at about 8pm and a band were playing outside the Mercantile Hotel which is adjacent to the venue. The atmosphere was electric. 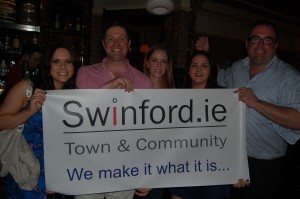 A great night to promote Swinford.

Cathal Kelly met me at the door, a relieved man! He was over and back to my shop all week, stressed that no one would turn up but I knew when he put that much effort in to organising it that it would be a success and a success it was! At least over 100 people turned up to the event.

The aim of the night was to promote upcoming events in Swinford town and create awareness about what we have to offer visitors and locals alike. Swinford’s newest Councillor Michael Smyth and Cathal Kelly opened the proceedings. Michael spoke about the beautiful countryside around Swinford where people can enjoy cycling, amazing walks and some of the best salmon fishing in the world. Cathal welcomed everybody on behalf of the Swinford.ie committee and he spoke about upcoming events such as Siamsa Sráide on the 1st to the 6th of August and the Humbert Olympic Challenge on the 27th of July. An important point that both Michael and Cathal made was that as members of the community, we make it what it is and the more people that attend these local events the better these events will be. 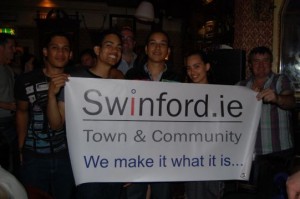 Everyone enjoyed the night

Everyday Solution provided the entertainment and were amazing. Even though we had a private room in the venue, we had people from every country coming in to enjoy the music and the atmosphere.  The lads had just finished their leaving cert and I believe they are booked for at least 2 gigs every weekend throughout the summer!

Pictures from the Swinford.ie launch night have been uploaded to the site. We would just like to thank everyone for attending, it was great to see all the familiar faces. Thank you to Tom Lavin, Megan Durkan and Katie Campbell for all their work up to and including the night and the rest of the Swinford.ie committee who couldn’t make it to Dublin but did a lot of work in the lead up to the event, Thomas Grufferty, Aoiffe O’Hara, Martin Maye and John Ikeringill. Thank you to Michael Smyth and to Cathal Kelly for all his hard work organising, co-ordinating and promoting the event.

All in all, the night was a great success. One person  described it as the best night of his life, I don’t know if I would go that far but it was a great night!