Swinford under 12s have been enjoying great success under the management of Ken Spragg ably assisted by his son Mark, Don Miller and Dougie Cairns- and with the unswerving support of the parents. The team came together in 2011, raw recruits barely 10 years old. They were not put off by some early defeats by the big teams but kept on improving year after year. 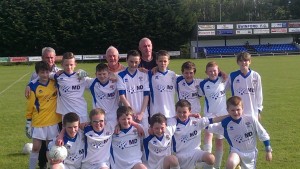 Last year was an exciting year for the team – undefeated in Division 2 and with some great performances from them all. Callum Cairns scored over 50 goals, Midfield was ruled by Luke McNicolas and Ewan McDonnell. Player of the year was Danny Molloy in defense just to mention a few. There were a lot of tough games throughout the season but they fought hard and improved as a team with every game. They secured the division 2 title in their last game against Clew Bay.

This season they moved up to the under 13 League where they are playing in Division 1. They have not let the success get to them and are at present fighting for the title against Straide and Foxford United. The League will be finished up over the next couple of weeks and here’s hoping that they can hold their nerve and come out victorious.

It just goes to show that hard work and sticking together as a team can pay off. This will be manager Kens last season with the team and he cannot praise them enough for their work effort, team spirit and Workmanship.