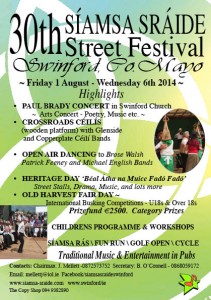 A preview of Siamsa Sraide 2014

The annual Siamsa Sraide Festival is taking place again this year from Sat 2nd August to Wed 6th August. This is the 30th anniversary of the Siamsa Sraide Festival in Swinford . The Siamsa committee are always very keen that children’s entertainment  is a very important part of the festival. The week before the start of Siamsa, there will be series of workshops for all the kids to take part in and most importantly ENJOY. The workshops are open to both Boys and Girls of all ages .This year there will be three different workshops going for the week beginning Monday July 28th in Scoil Muire agus Treasa. They include CREATIVE DANCE , WEST AFFRICIAN DRUMS and a new class this year TRADITIONAL IRISH MUSIC on the Tin Whistle, Fiddle ,Bodhran and Banjo

The creative dance classes this year will be run by Maura Dee, grand- daughter of Ray Lambe, Main Street. They are for 8 years and upwards and commence on Monday 28th July from 10am to 12pm.

A very popular workshop last year finishing with a spectacular display by the children on the streets of Swinford on Bank Holiday Monday. Classes will be run by Barra o Flannaithe and will commence Monday 28th July from 7pm to 8pm

All Workshops are open to both boys and girls and are completely FREE OF CHARGE .The grand finale of all of the workshops will be an open air, on street performance on Bank Holiday Monday 4th August. COME ALONG AND ENJOY THE “FUN ON THE STREETS” SIAMSA SRAIDE