Swinford, The Republic of Connacht 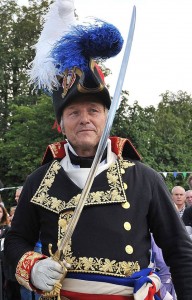 On the 31st of August 1798, General Humbert proclaimed the establishment of the Republic of Connacht. John Moore was our President and General Humbert was the Commander in Chief of our Army. The Government, made up of 12 members, resided in the capital of Castlebar. President Moore was mainly focused on organising an army to free the rest of Ireland. However, as a good Straide man, he also made time to issue “paper money to a considerable extent’

As a French client state, we were at war with the Holy Roman Empire, Great Britain, Prussia, Russia and Portugal.

Now, while Castlebar was the residence of the Government of the Republic, Swinford was considered the Party Capital. General Humbert, with all his officers, dined, drank and planned victory in ‘Timothy Corley’s Hotel’, which is best known as ‘The Hagen Bar’.

Unfortunately, like many a Mayo All Ireland dream, the Republic of Connacht did not last long into September. Our Commander in Chief, General Humbert, was defeated at the Battle of Ballinamuck and the Republic ceased to exist.

Swinford the Republic of Connacht

For 9 glorious days, Connacht was a Republic, we had our own currency – and Swinford was still the place where you went to dine, drink, party and spend the rest of your money foolishly!

Make it out for a trip back in Time.