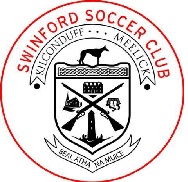 A 3-1 victory over Castlebar Celtic B’ was enough to ensure Swinford have a day in Milebush to look forward to against Conn Rangers, as they will contest the Westaro Cup final at the end of this month.

They didn’t have it all their own way as the scoreline would suggest and the game was only sealed in the dying embers of the game after a stout defensive performance stifled constant Castlebar Celtic attacks.

Swinford began the game in the ascendancy with the front three of Richie Dalton, Vinny Murtagh and Alan Carter all getting in behind the defence and having chances on goal within the first 20 minutes of the game. Carter saw the first of his attempts saved before Dalton opened the scoring midway through the half. A through ball from captain Tom Kavanagh found Dalton in space behind the defence before the winger took on the defence and fired a low shot from the corner of the area.
Minutes later it was Kavanagh who had his name on the scoresheet. Alan Carter beat his man along the sideline and drove towards goal but after attempting to cross from the byline was taken down with a rash sliding tackle inside the penalty area. Tom Kavanagh stepped up to take the resulting penalty and he left the goalkeeper standing with a fine finish to the right of the goal.

From that point on it looked as if Swinford would kick on and put the game to bed but Castlebar Celtic fought their way back into the tie from the start of the second half with a change in formation that saw them push higher up the field and taking more chances. Their pressure paid off when after a free kick was hastily cleared, referee Damien McGrath judged a Swinford player to have handled it inside the area. Stephen Jennings left Shane Holleran with no chance despite the keeper going the right way.

A tense final 15 minutes ensued with wave after wave of Celtic attack cleared by Robbie Quinn, Mick Walsh and Sean Kenny. Their last chance at levelling the game and bringing it to extra time fell with just moments left in the game when a corner into the area pinballed around before their last attempt was fired over by the center back through a crowd of bodies.

With time nearly up, Swinford sealed the victory with their third and final goal after Eoin Kelly curled a pass down the sideline to Martin Sweeney who raced clear of the Celtic defence before pulling it across the box to Alan Carter who sidefooted it into the net.

The victory means Swinford move on to the final in Milebush which is likely to be held on the last Sunday in July. Before then they have a number of league ties to contend with starting with Killala this Sunday at 12pm as they aim to stay top of the league.