The Swinford senior soccer team head to Milebush on Sunday as they attempt to win the Westaro Cup against divisional rivals Conn Rangers. The sides have faced each other twice this season with both sides winning their respective home game. 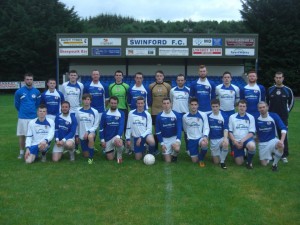 Swinford’s run to the final saw them overcome Claremorris in the Quarter Final and Castlebar Celtic B’ in the semi-final with goals from captain Tom Kavanagh, Richard Dalton and Alan Carter sealing their spot.
Their preparations for the final began well with goalkeeper Shane Holleran netting a penalty and goals in either half from Ian Price and Sean Kavanagh finishing off a convincing 3-0 victory last weekend over Snugboro. That victory leaves them well in contention near the top of the Premier A’ division with just five games to go.
However, their attentions turn to their first senior final since victory in the McDonnell Cup in 2010 and speaking to the Connaught Telegraph this week, manager Val Kenny admitted there will be little between to the two sides when they take the field Sunday.
“We know we are in for a difficult contest. It’s going to be an interesting game. They probably came through the tougher side of the draw in fairness to them. Which team wants it more will probably win it and it could go all the way to be honest.”
The game kicks off at 3pm in Milebush Park and all support on the day will be gratefully appreciated.