It took a tough 110 minutes and a nervous penalty shootout, but Swinford soccer team battled their way to victory in the Westaro Cup final against Conn Rangers last Sunday. Goalkeeper Shane Holleran was the man of the hour as he stepped up to score the first penalty and saved the oppositions first two efforts to clinch the tie. 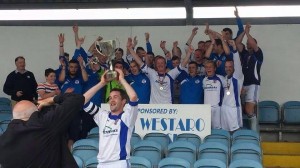 The game itself was a cagey affair for large periods with neither side wanting to gift away a chance that could decide the direction of the trophy. In the early exchanges Padraig Noone – playing opposite his cousin James Noone – had most of the joy down the right han side for Swinford and he had an effort hit the outside of the post from an acute angle. At the other end Matthew Leneghan fired over a shot from outside the box after some good work from Shane Burke to create the opportunity.   It was Conn Rangers who landed the first blow shortly after half time when a James Noone corner was met at the near post by defender Mick Walsh who unfortunately turned it into his own net.   Swinford composed themselves and Walsh, along with his fellow defenders Neil Fallon, Sean Kavanagh and the brilliant Alan McLoughlin led the way. It was Fallon who would be the starting point for the Swinford goal as he played Padraig Noone into space down the right hand side before Noone crossed to the back post for midfielder Darragh Price to finish from close range.   Despite playing into a strong breeze, Swinford were the side looking more likely to nick the game in normal time and Padraig Noone came within inches of scoring a long range volley with minutes left on the clock. Conn Rangers had a couple of efforts of their own with the most clear cut of these when Shane Burke had a low shot on goal from just inside the box saved by Shane Holleran.   An uneventful period of extra time passed with little or no chances before the deciding penalty shootout. Shane Holleran scored the first penalty and saved from both James Noone and Trevor Ward with Tom Kavanagh putting away his effort to give Swinford a 2-0 lead. The drama was not over there however as the next two Swinford penalties from Padraig Noone and Martin Sweeney were saved and missed respectively whilst Owen McNamara and Niall Gillespie hit theirs high into the net to level it. The final Swinford penalty was scored by Darragh Price before Darren Coleman saw his effort come back off the post and begin the Swinford celebrations. 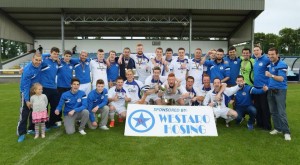