Home » Featured » History in the making for Swinford Golf Club!

History in the making for Swinford Golf Club!

Established in 1922, and set in the beautiful woodlands of Brabazon Park, Swinford Golf Club is an idyllic 9 hole golf course and for the first time in the club’s history, the ladies club have reached an Inter-club Connacht Final! The final will be played in Athlone Golf Club this Saturday at 12pm against Galway Golf Club, Salthill. The panel for the team is: Mary Doyle, Esther Munnelly, Carmel Timoney, Bernie Walsh, Brenda Coyne, Siobhan King and Dympna O’Donnell (The team captain). 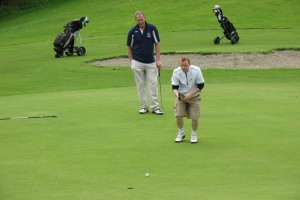 The men’s club have also tasted success, having reached the final of the Cecil Ewing Connacht Championship. The final will be played over two legs and the first leg will be played against Gort Golf Club in Gort this Saturday at 12pm and the second leg will be played  on the 6th of October in Swinford Golf Club.  The team from the semi final included Michael Walsh and Jim o Donnell, Marty Munnelly and Ron Howko, Eugene Maloney and Michael Rowley, PJ Hennigan and Philip Irwin and Danny Lambe and Alan Bredican. This is the first time the club has ever played in the Cecil Ewing Final and captained by Kevin Feeney, I have no doubt they will be successful!

We wish both the men and the ladies of Swinford Golf Club the best of luck and fingers crossed they will bring home the trophies!