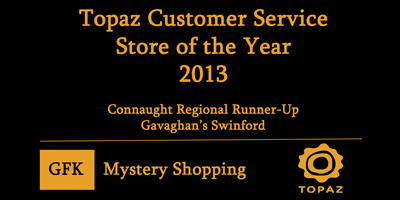 The award received by Séan and Angela Gavaghan

On the 20th of May, at the national Topaz Awards 2013, Séan and Angela Gavaghan, the proprietors of Gavaghan’s Topaz Garage in Swinford, were delighted to win a “Topaz Customer Service Store of the Year 2013 Award” for the Connaught Region.

Miriam O’Callaghan hosted the awards event at the luxurious Knightsbrook Hotel in Trim and it was a full house with award nominees travelling from all over Ireland. Considering that Topaz have over 300 garages across Ireland and 100 garages in Connaught alone, this was an epic achievement by Séan, Angela and all their staff.

Gavaghan’s garage has been operating in Swinford since the mid 1990’s.  The products and services they offer include a Mace convenience store with a deli, coal and fuel including gas cylinder rental and they also repair and sell bikes.  To anybody living in the local community, it is no surprise that they won the award for customer service.  Séan, Angela and their staff always have a warm welcome for their customers and they always do what they can to send you away happy.

It is a great achievement for a local Swinford business to receive recognition at a national level and the people of Swinford and the local business community are proud of Gavaghan’s award.  Congratulations and well done to all at Gavaghan’s Topaz Garage Swinford! 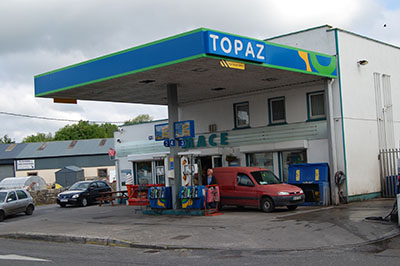