The pale moon was rising above the green mountain,The sun was declining beneath the blue sea;
From Swinford to Westport we traveled with Glee!!!!

As we all know one of Swinford’s finest young women Shonagh Rowley was crowned the first Blàth Nà Fèile at Siàmsa Sràide last August. As one of the rewards of becoming the ‘flower of the festival’ Shonagh was sponsored (by Siamsa Sraide) for the Mayo Rose leg of The Rose of Tralee Festival, which took place on Saturday 11th April 2015 in The Castlecourt, Westport. 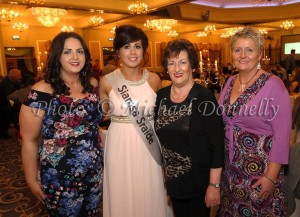 The Mayo Rose competition is a fabulous experience but it’s not to be taken lightly, there are many preparations and hurdles for all the fabulous women who compete to have to go through. The day starts early with individual interviews, for judges to get a feel for the girls personality, education and life experience. Then followed by group sessions to test general knowledge and make sure that these young women are up to date with current affairs. Lastly, the on stage interviews and /or performances.

And a performance, is an understatement to the bright, bubbly, intelligent and witty interview that Shonagh had with Michael D McAndrew ( Midwest Radio Presenter & MC on the night) . Shonagh had the crowd in hysterics with her fabulous orginal poetry and it goes without saying she looked STUNNING .

Not only was I proud to be supporting Shonagh on the night…I was over joyed to say I was from Swinford!!! The support of all of Shonagh’s family, her friends, employers ( Carmel’s Café and The Gateway Hotel) work colleagues and Siamsa Sraide committee members was so IMPRESSIVE that the reigning Rose Of Tralee, Maria Walsh, called me aside following the ceremony to commend us on such wonderful enthusiasm and community spirit. 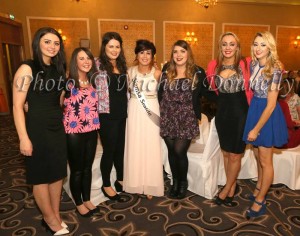 We may have come home without the Mayo Crown, but WINNERS we are …with such fantastic young women like Shonagh Rowley in our community. I would like to personally thank Shonagh for being such a PERFECT example as to what Blàth Nà Fèile stands for. Shonagh didn’t take any part of this past year lightly. She worked, studied and prepared for Mayo Rose and has accommodated any request through out the last year. SO here is to Shonagh Rowley and our future Swinford Flowers of the Festival!!!!