Swinford is a planned town, created on the estate of the local landlord who were the Brabazon family. The Brabazon family originated in Eastwell, Leicestershire and joined the losing side in the Jacobean wars of the late 17th century. As a result of this, their estates in Galway were confiscated and they were granted one third of their original landholding in Mayo. Mayo was the only county in Ireland that allowed defeated Jacobean officers to settle and hold land without which, Swinford would never have existed. 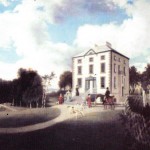 The Brabazon family originally lived in Tullinacor while Brabazon house was being built in 1780. As early as 1769 they began to grant leases on their land of 999 years to about 40 people to build houses to a pre-planned pattern and layout. The leases made the plot practically freehold so people could build substantial houses, secure that they would not be evicted provided they paid the ground rent. This resulted in three story houses of good quality on generous plots. Later the landlord, William Brabazon donated the timber and slates for the roof provided the building conformed to a stated quality. 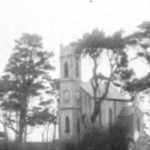 The Protestant church was built in 1810 by the board of First Fruits and the tower was donated by the Brabazons’ a year later. The Glebe House was built in 1819 by the Rev. Borroughs, and the glebe land in Rathscanlon was acquired by the same man. The Catholic church was built on the present site on land leased from Brabazon. It was a long, narrow, plain building with a thatched roof called the Barn Chapel. The present beautiful church dates from 1891, built at a cost of £4,000 by local builders, the Mulligans. 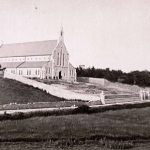 The stained glass window over the alter is from the Harry Clarke Studios by Richard King and the cost in 1953 of £1,500 was donated by Miss Kathleen O’Connor and her sister Mrs. Mulligan. To put this in context, the sum was about five years wages for a labourer. The parochial house was built in 1912 and refurbished in 2012.

The courthouse dates from 1840 and the building on the left of it was the Bridewell which was built in 1842. The Bridewell had six cells and accommodation for the keeper and his family. The premises are now the offices of F.G. Phelan & Co. Solicitor who rescued it from dereliction.

The Workhouse was built in 1842 and opened in 1846 just as the famine was raging. The death rate in early 1847 was so severe 564 bodies had to be buried in a mass grave at the rear of the Workhouse instead of the paupers’ graveyard across the road. The front portion of the workhouse survived and is now called the willows. 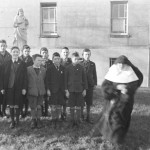 The Sisters of Mercy came to Swinford in 1855.

The Sisters of Mercy came to Swinford in 1855 and founded a convent near the parish church. They took over the running of the Workhouse in the 1880’s and established a secondary school for girls in 1906 as well as a primary school. St. Annes’ Steam Laundry was set up by the nuns in 1925 and lasted into the 1970s. The nuns also bought Brabazon House in 1916 and set up a Rural Domestic Economy School in the house on about thirty acres of land. The nuns closed their convent in 1989 and it was demolished in 1990 and modern housing was built to cater for the remaining sisters. The Sisters of Mercy provided education, health services, and industrial employment when there was very little or none of either in Swinford for 150 years and all without personal benefit to any sister. Some achievement! 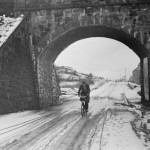 The most prominent feature on the road into Swinford from Foxford is the double arch stone bridge. This was built between 1890 and 1895 to carry the railway over the Ballina Road. Recently the Goods Store at the now disused station was opened by the Taoiseach as a completely refurbished Cultural Centre and Library. The railway closed in 1975 but a campaign to reopen it as part of the Western Rail Corridor is ongoing.

The name “Swinford” comes from a village of the same name in Leicestershire. The Leicestershire village is a compact place of 360 people centred around a stout Norman church. Swinford in Leicestershire was mentioned in the doomsday book in 1086, an indication that it was important even 900 years ago. Their logo for the village is a pig in a stream which is exactly our own explanation of Beal Atha na Muice; the mouth of the ford of the pigs. So both the name ‘Swinford’ and the mythology of pigs and rivers is an import by Brabazon from England. Beal Atha na Muice is simply an intelligent and handy ad-hoc gaelicisation of the place name Swinford.

Article by: Michael Comer whose family have deep roots in Swinford town.  Michael’s walking history tour of Swinford is one of the most popular events of Siamsa Sraide.  Keep an eye on Swinford.ie for information about upcoming tours.